You cannot see this page without javascript.

Everything is production: production of productions, of actions and of passions; production of recording processes, of distributions and co-ordinates that serve as points of reference.
- Gilles Deleuze and Felix Guattari, Anti-Oedipus 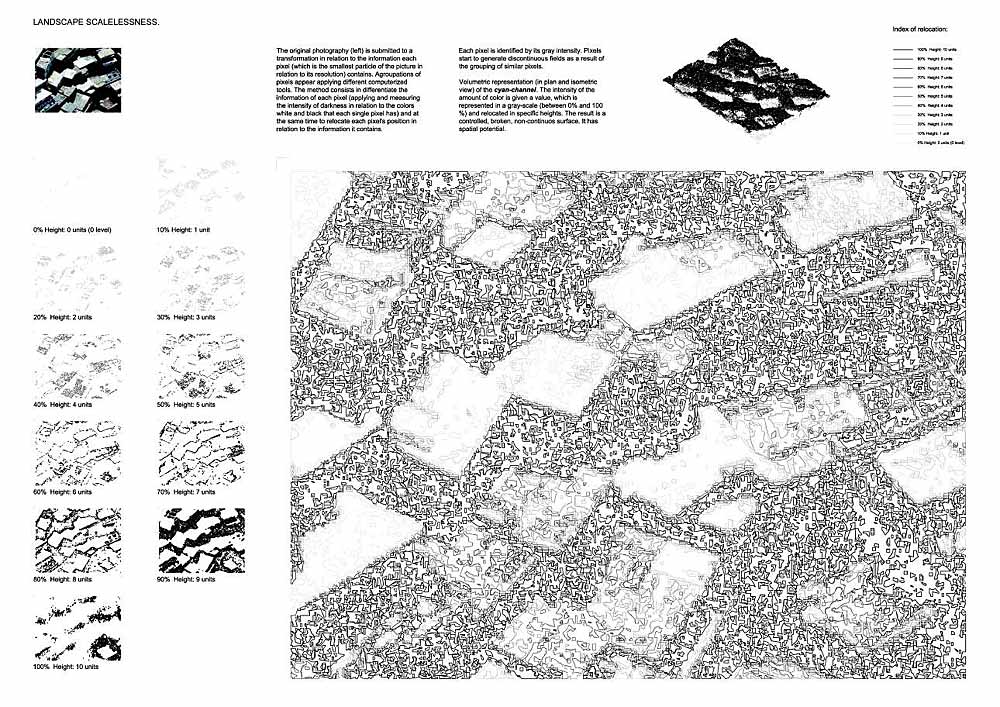 Initially a structural and spatial organisation was developed as a principal language to be examined
and tested on different scales and for different uses.
Once discovered, its nature would serve as a series of generative rules that would inform the designs.
The origin of spatial and structural potential was found in a small particle of information.
Pixels within a photograph become the root of the abstract generator.

The Pankese School Extension project originates as a systematic organisation of points that relate to each other through connections.
The lines of these connections are the source for the establishment of surfaces, the skin that gives form to the architecture.
Hyperbolic paraboloids appeared as principles and were used as techniques.

Analysing existing architectural examples and site-specific conditions was the key to finding relevant information for this design.
The proposal follows a free morphing surface influenced mainly by dynamic circulation and sun-light diagrams.
Characteristics ranging from annual rainfall and erosion to the cultural and social behaviour of Pankese’s students were then added to the list, exponentially upgrading the system.
The resulting proposal shapes and models its geometry based on a sequence of particular parameters, suggesting a strong relationship with place and user.
As the new architecture is mainly designed for the students, the relative low heights of the roof define the space keeping adults out of these areas.
The way the structure makes contact with the ground allows children to climb over, thereby invading the upper skin of the building.

A trip to Pankese gave ‘Unit 4’ an opportunity to realize the project learning about materials and details of construction.
It was a moment of rethinking and questioning the performance and acceptance of the design.
During construction, the inhabitants of the village would ask about the unusual structure and were involved in the process of making.

The Barbican was chosen as the site for testing this system’s mutability.
The ‘Responding House’ is a platform characterised by the activities and necessities of the urban worker and dweller.
Pedestrian commuters, office workers taking lunch breaks and tourists visiting the Museum of London all intervene in the site, creating a dynamic set of conditions to which the platform must adapt.
This responsive and flexible system, capable of coping with and providing for a host of uses, is further tested in relation to weather changes and cultural preferences.
Similar parameters (with new values) perform as an invisible layer of information responding to the modelling and materialisation of the new architecture.
I have produced a habitable surface that is capable of responding over time to various conditions like internal and external activities, programmatic necessities, views and weather conditions.

Information is the driving ingredient for a contemporary progressive architecture.
Therefore, research about how information can inform form and make form perform is of great value.
The question is how to define abstract consistent-transformation processes, processes capable of instigating newness in architecture.
The focus lies within the ‘process’ of working rather than on the particularities of the projects or sites at hand.

The quality of Daniel’s process lies in its discipline, rigour and consistency.
This, coupled with his daring and his ability to accept unanticipated effects within the elaboration of the project, allows him to pursue open-ended problems with an architectural formulation.

In a short project around the topic of scalelessness, he developed a 3D spatial structure from a landscape-scale photograph.
Via a transformation process for which he set out the rules, and with an exceptional level of discipline and consistency,
he unashamedly exploited the new structural, spatial and surface potential offered by the abstract processes designed
within the beginnings of the project.

Subsequently Daniel investigated historical school systems in search of relevant ‘tweakable’ information or latent ‘exploitable’ potential,
in preparation for a school /library project for a small village in Ghana.
In this part he informed the potential exploitation processes with relevant information.

Finally, he took the ‘system’ he had developed over the course of the year, and reinvestigated it in the context of a London site and a domestic programme.
The two culturally and climatologically different sites helped to test the adaptability and flexibility of the developed systems as well as demand a real understanding of context and site.

With attention to detail and a feel for beauty,
Daniel produced a real understanding that any \"bit\" of process harbours potential. His work is in itself a true process:
an infinite sequence of carefully considered and beautifully drawn investigations that over time will unavoidably produce architectural quality.